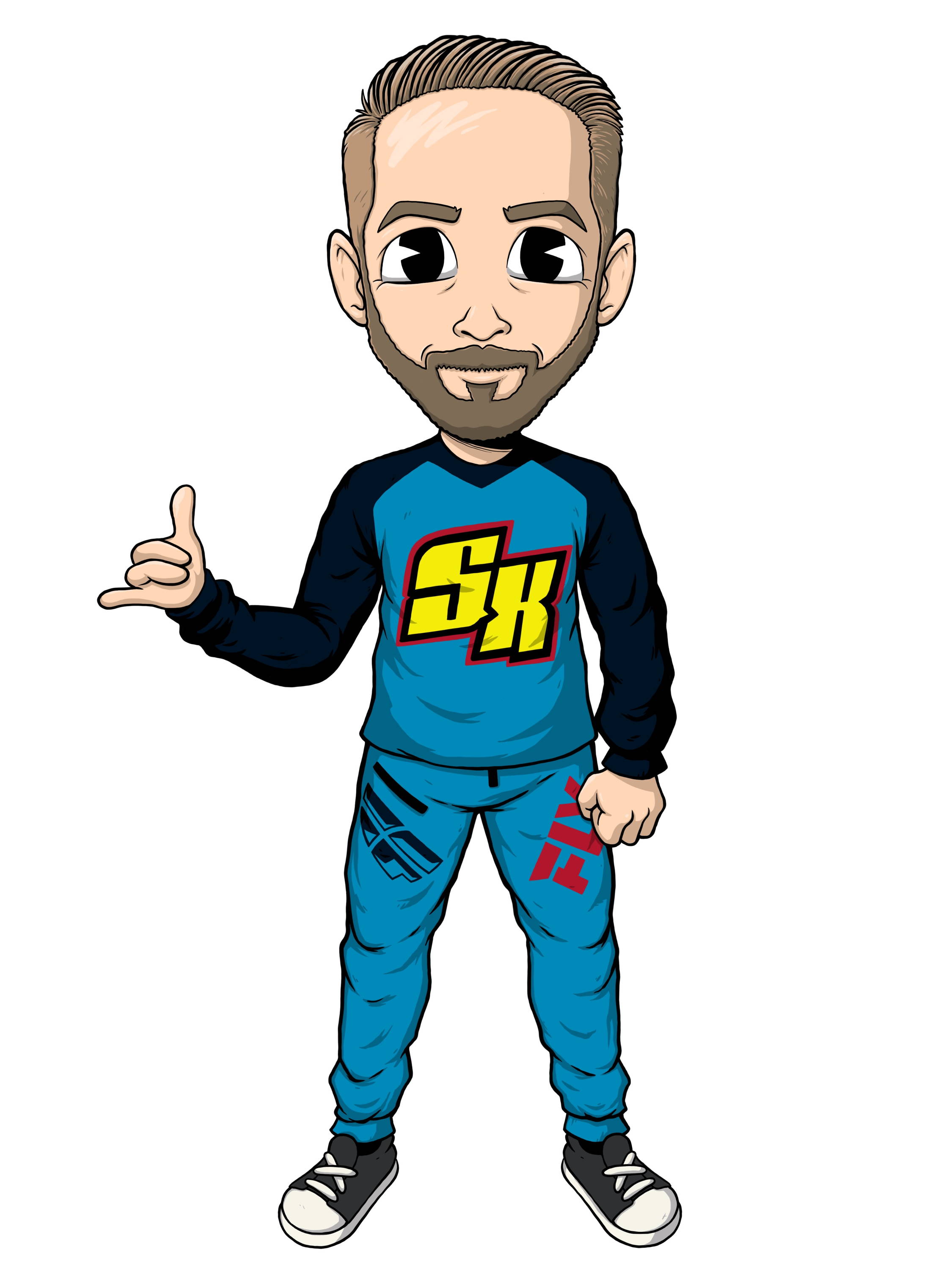 “Who is Tim Dinger? “That is a tough question to answer. I am just your average guy from the Midwest that loves BMX.” – Dinger.

Dinger is a long-time friend of the Supercross brand and an advocate for all disciplines of cycling. From BMX, Mountain bikes, Road bikes, and everything in between, He does it all! Dinger started racing BMX at the age of 16. After his first Novice race at The HILL in Elgin, IL, he became fascinated with the sport's speed and competitive nature. Before BMX, Tim was a full-fledge skater with three half pipes in his back yard. However, after his first few BMX races, he tore down the half pipes and built a local racetrack for his local community. These trails would be named "butter" trails as they were all about how smooth you could flow through the sections.

After a few years, Dinger found himself traveling to every race he could with his new team IDC. This would also become his first opportunity at riding a Supercross Frame – the SX UL. Dinger would later turn A-pro, and after several years in the class, he would transition into racing Vet Pro. Currently, Dinger resides in the Netherlands of all places, where he spends most of his time ripping through local trails and racing road bikes.

Some of Dinger's highlights in BMX include World #2 in 2007 & 2008, World #4 in 2009, and winning the NBL Grands while throwing a sick x-up into turn 2. More importantly than race results, Dinger takes great pride in coaching local kids to become better riders. If you ask him what the best part of his journey was with BMX, he will tell you endless stories and memories that he has had over the years. From epic road trips, races in the rain/mud, commentating for videos, random trails sessions, and countless jokes.

Dinger was officially welcomed into the factory ranks in 2013 after riding a Supercross for a few years on IDC. He has always been a fan of the products and chatted with our owner, Bill Ryan, which eventually lead to a mutual partnership. Dinger loves being a part of the SX family and carrying the Supercross flag as he states,

"I get to ride the sickest bikes out there!!!   Supercross is constantly innovating, coming out with new products that I get to test. Being able to test out parts and frames before they come out is great, so we can always push improvement with rider inputs. It's one of the reasons why SX has constantly evolved and has been doing it for 30 Years! Not many brands can say that if any?"

Even though Dinger lives in the Netherlands, he continues to ride as much as possible with BMX and road racing (testing new SX road bike – shhh top secret). He has set his sights to work within the industry one day and maybe even start his own brand someday. Until then, he will carry the Supercross flag internationally and will be cracking jokes and having fun along the way.

Tell me about yourself. Who are you? How old are you? What class do you currently race? When did you start racing? How did you start racing? Etc.
Who is Tim Dinger? That is a tough question to answer. I am just a normal guy from the Midwest that loves BMX. I grew up riding trails in the south side of Chicago and eventually made my way to Elgin BMX (The Hill). From my first race as 16 Novice I was hooked on racing. Before BMX I was a skater and had 3 half-pipes in my backyard that my older brother had built. It was not too long before we tore down the half-pipes and started to build trails. Racing in the Mid-West was amazing as everyone would travel to Rockford every weekend. We would have 60-90 motos at a single point race and even hit 130 during Elkhorn indoor. Jack McDaniel was a local rider turned photographer and he started a new team called IDC Racing and had asked me to join. We toured the east coast in a minivan to every National we could. This was also the first time I had rode a SX frame – the UL. Eventually IDC became BMXweb.net. I ended up racing A pro for a good amount of years and turned Vet Pro for the BMX Worlds in Victoria Canada. (At that time, I could either race Elite Masters or race Elite and there was no way I was going to race against Kyle Benet and KY, hahah.) I ended up taking 2nd in Elite Masters that year behind JP Fellin. Took 2nd again at the Worlds in China after I didn’t close the door on Dale Holmes. In 2017, I ended up with an opportunity to move to Amsterdam Netherlands, which I quickly jumped on. While there are some great tracks here in the Netherlands it becomes a bit difficult to get there without a vehicle, so I have been riding the local trails and testing my fitness racing road bikes.

What are some of your biggest achievements within the sport?
2007 World #2 (Canada)
2008 World #2 (China)
2009 World #4 (Australia)
Winning NBL Grands while throwing x-Ups into Turn 2😊
Helping to coach kids who have been successful
Traveling the world on a bike and sharing endless stories with friends

How long have you been on factory Supercross? What year did you get picked up?
Well I rode SX bikes for a few years when I raced for IDC. I had always been a fan of the bikes and chatted with Bill over the years. I started to officially ride for SX in Nov 2013.

What’s your favorite thing about being a Factory Supercross rider?
That I get to ride the sickest bikes out there. SX is constantly coming out with new things. Being able to test out parts or frames before they come out so we can make them the best is super cool. You can give direct rider feedback into the development and production of products. Bill’s mind never stops, and he is always coming up with something. I guess that is why SX has been around for almost 30 years – not many can say that.

Taking the bikes out of it, Supercross is more of a family than anything. You can always see the vibe within the team, and I think that is the best part.

What’s your current local track?
Uithoorn BMX in the Netherlands

What’s your favorite thing about BMX Racing and Why?
It is the people you meet and endless sessions with friends. There are not many sports out there that can teach you so much and push you in so many ways. BMX teaches you that you must put in the work to get the results. There are no coaches or team practices like you have in team sports. If you want to get better/faster, you need to practice and do your sprints. Self-motivation is key, and it will carry over in life.

What are your hobbies outside of racing?
Road bike racing & eating way too many cookies

What are some of your goals for your racing career?
Stay fit, consistent, and most important have fun along the way

What are some of your goals outside of BMX Racing?
Work within the BMX cycling industry or start my own company