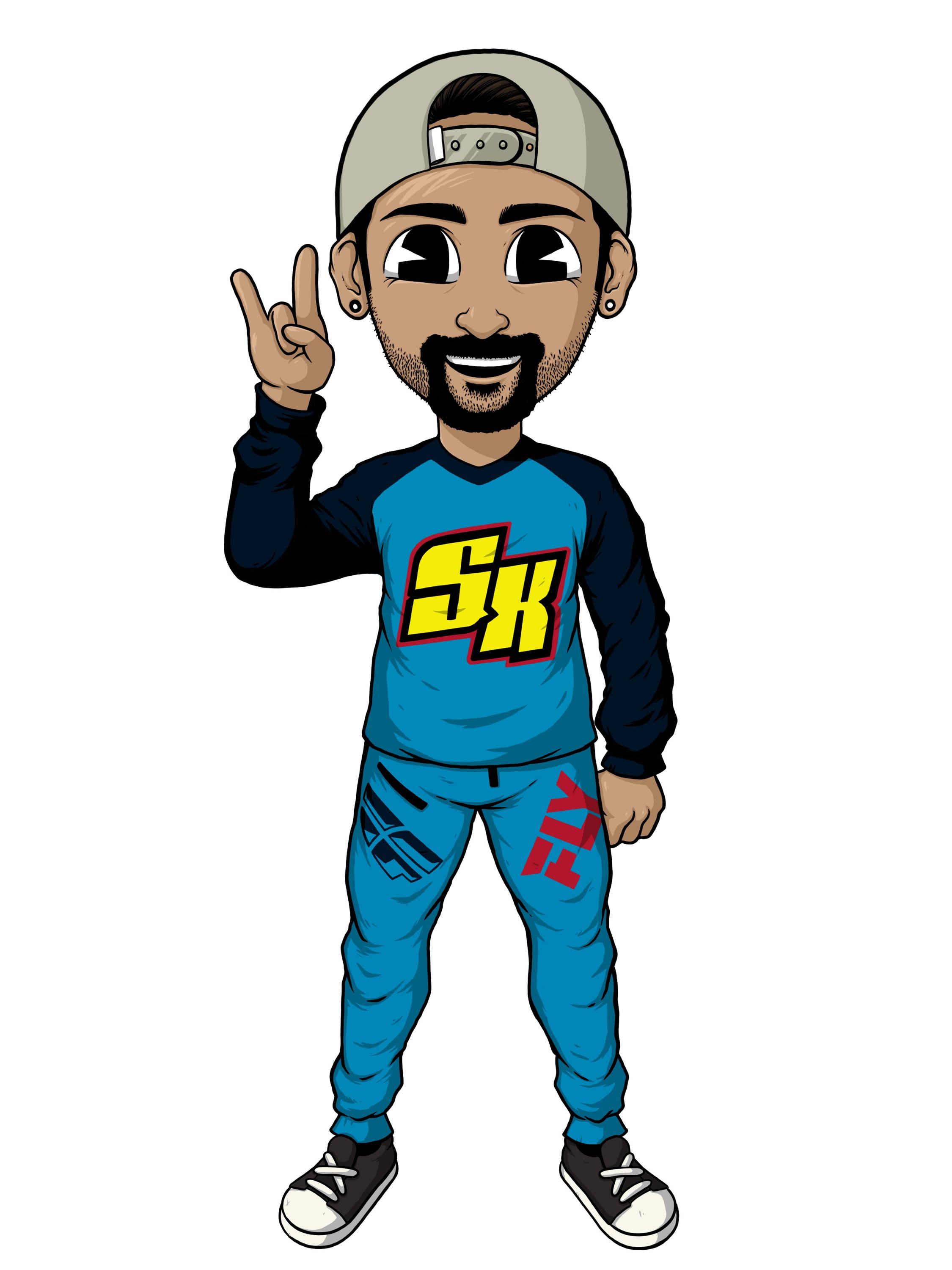 Meet KJ Romero
KJ is the Youtube Mastermind behind the Supercross brand. He was first introduced to BMX racing when he was just five years old. After seeing a commercial on TV for the local race track, KJ and his brother headed out to see what it was all about. KJ and his brother borrowed some bikes from their cousin, and KJ became hooked on the sport after that day 23 years ago.

KJ has been in the sport for quite some time and has competed against some top-notch riders. His most significant achievements were winning the USA BMX Rookie Pro of the Year award in 2012, and turning AA Pro the most elite proficiency in the sport of BMX. Racing the elite class was an excellent learning experience for KJ, and he had a blast battling it out with some of the best racers in the world! To name a few, KJ got to line with the likes of Mike Day, Donny Robinson, Maris Strombergs, and THE Kyle Bennett.

KJ is a longtime friend of the Supercross brand and has been a part of the family for over 12 years. He was first picked up in 2012 by our sister company, Factory Anarchy. After a year and a half of riding for Anarchy, KJ ventured off into full-time job life. He would later rejoin the Supercross family at the beginning of 2016. KJ was more than happy to rejoin the Supercross family. He thoroughly enjoyed his time with us in the past, and the team is his family. He enjoys hanging out with everyone at the races and having fun with his people. Also, KJ really digs the race whips we supply him with!

Looking forward, KJ doesn't have too many race-related goals. He's just enjoying the ride and hanging out with friends at the track. Outside of BMX, KJ's goals are to provide for his family, become a photographer/videographer, become fully monetized on YouTube, and live a healthy lifestyle. In his spare time, you can find KJ building dirt jumps, riding trails with friends, doing electrical work, or producing YouTube videos for the Supercross team. 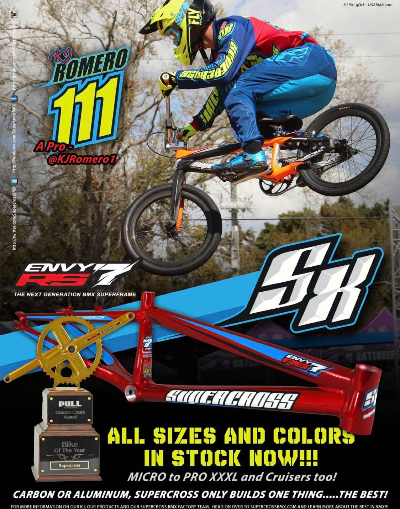 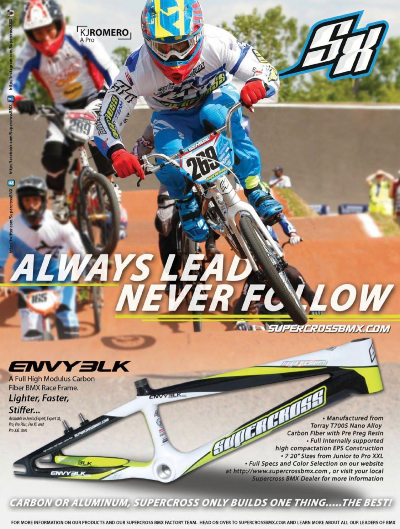 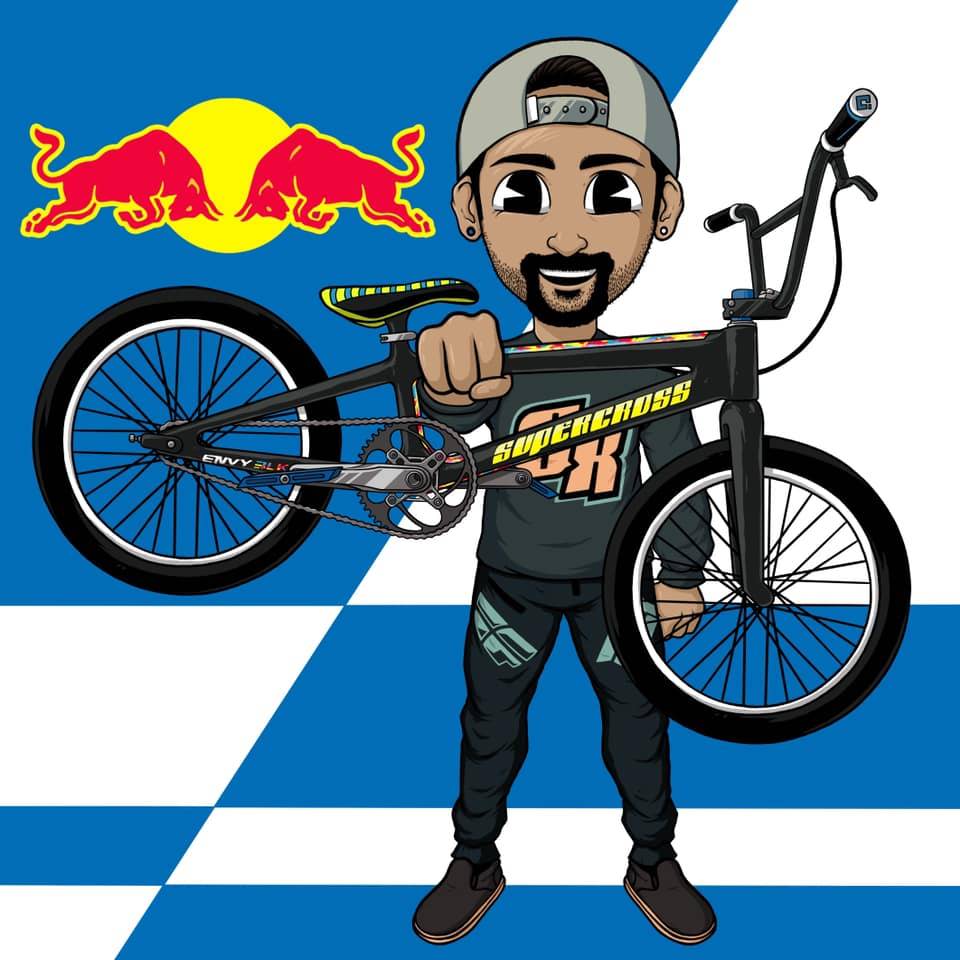 My name is KJ Romero, I’m currently 28 years old racing in the A pro class. I remember when I was 5 years old, my brother and I saw a commercial on TV at the local BMX track. My cousin had raced when he was younger and had a couple bikes laying around. So he let us barrow them, my dad took us to the track, and I’ve pretty much been hooked ever since. Man, that was 23 years ago. I’m old.

What are some of your biggest achievements within the sport?

I think a couple of my biggest achievements would have to be winning the Rookie Pro of The Year award in 2012, as well as becoming a AA Pro. I wasn’t the best AA Pro, but it was a great experience and I had fun battling with some of the best BMX racers in the world. I was also lucky enough to line up with a few legends like Mike Day, Donny Robinson, Maris Strombergs, and KB88 Kyle Bennett.

How long have you been on factory Supercross? What year did you get picked up?

I’ve been apart of the Supercross family for, I’d say, a solid 12-13 years. But I didn’t technically join the team until 2012, on Factory Anarchy. Supercross BMX sister company. I rode for Anarchy for about a year and a half, ventured off path for a little bit doing the Full-Time job thing, but re-joined Factory Supercross at the beginning of 2016.

What’s your favorite thing about being a Factory Supercross ride?

What’s your favorite thing about BMX Racing and Why?

There are so many things about BMX racing that are my favorite from the friends, traveling, meeting people from all over the world, even losing a race and having that burst of motivation to to do better at the next race. BMX racing taught me so many positive life lessons, I am forever grateful.

What are your hobbies outside of racing?

My hobbies outside of BMX racing are building jumps, riding trials with friends, electrical, and making videos for YouTube.

What are some of your goals for your racing career?

At this point in my racing career, I don’t really have any goals. I’m just enjoying riding my bike, seeing friends at the track, and being a father and husband at home.

What are some of your goals outside of BMX Racing?

Some goals outside of BMX racing- #1- providing for my family. #2- become a photographer/videographer. #3- be fully monetized on YouTube. #4- live a healthy lifestyle.

Use this space to add any additional information that you would like to have included within your rider profile.